Macau or also spelled Macao is a special administrative region on the southern coast of China. One of the world’s richest cities according to World Bank and it became he world’s largest gambling center in 2006, with the economy heavily dependent on gambling and tourism, as well as manufacturing. Macau is the ‘Vegas of the East’, the only place in China where gambling is legal.

The Ruins of St. Paul

The Ruins of St. Paul’s (also known as Sam Ba Sing Tzik) stands adjacent to the famous Mount Fortress and Macau Museum. The front façade and the grand stone stairs are the only remains of the greatest church. 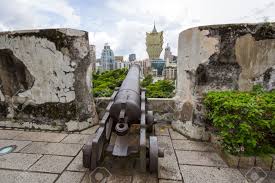 Monte Fort is the oldest, lying to the east of the Ruins of St. Paul’s. Built in 1616, it originally belonged to St. Paul’s Church and was used to defend the church from the pirates. It later became solely a military fort.

The Museum of Macau is the biggest museum in Macau. It is located in the famous Monte Fortress, in the heart of the city and where the Portuguese first set foot.

Camoes Garden and Grotto, or just Camoes Garden as well, is one of Macau’s oldest parks. A popular spot for locals to do their morning exercises, to play chess, to walk their caged birds (a Chinese custom) or to meet with friends. It’s an oasis in the busy city.

Casino Lisboa is one of the landmarks of Macau. The casino is famous for its variety of gambling games, unique design, exquisite decorations, and sound facilities. It attracts a great number of gamblers and visitors from all over the world. Moreover, it is known as Oriental Las Vegas or Monte Carlo of the East.

Senado Square (Largo do Senado) is a public square in Macau. It is located in the central area of the Macau Peninsula. There are shopping centers and traditional Chinese restaurants around the square. Fashion clothes, famous snacks and the scenic environment make it a famous attraction. Firework displays, lion and dragon dances are usually held on special days such as the Chinese Spring Festival and Christmas. One can go and enjoy those activities. 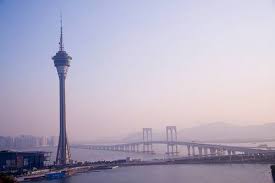 Macau tower measures 338 m (1,109 ft) in height from ground level to the highest point. An observation deck with panoramic views, restaurants, theaters, shopping malls and the Skywalk X, a thrilling walking tour around the outer rim.The Macau Tower’s tethered “skyjump” and bungee jump from the tower’s outer rim, is the highest commercial sky jump in the world (233 meters), and the second highest commercial decelerator descent facility in the world, after Vegas’ Stratosphere sky jump at 252 meters. Perfect for thrill seekers.

DISCLAIMER: THIS BLOG IS A PERSONAL BLOG WRITTEN AND EDITED BY ME. ALL THAT WAS WRITTEN ARE BASED ON MY OPINION, RESEARCH AND EXPERIENCES. THIS IS NOT A SPONSORED POST, I ONLY GIVE MY HONEST OPINION, FINDINGS AND BELIEFS. SOME PHOTOS USED ARE FROM GOOGLE IMAGES FOR INSPIRATION.

Create Your Own Visited Countries Map